The beginning can be used to underlayer guitar solo, plus is repetitive throughout song.  This and chorus, plus finally intro/ outro are what I had in mind tackling, looking to cover all aspects of piece (minus Jimi's distinctive vocals).

But, the feedback portion is excluded as I'm not on tube amplification.  So, is not advisable (electronics, longevity issue).

It's a minute long clip of yours truly, Mark Drobnick, performing essential component of song.  It is I, on guitar and voice.

During 4th bar, I do blues, scalar walk-up, utilizing strings 6 & 5.  The passage travels from tonic tone (as if were key of E), to the minor 3rd, major 4th, flat-5th, then landing upon dominant.

The wrinkle is that instrument is detuned a half tone from standard EADGBE.  Thus, everything I just wrote, sounds down a half step.  For example, everything you hear is in key of D♯ major, due to reduced, string tension.

Then follows upon the verse segment.  We have the chorus; it's basically a sequence of chords.

Nothing unusual here, except that G, instead of being traditional, box-chord shape, is simply open strings 4 thru 2 (second inversion of G triad).

The reason is technical simplicity.  Passage is easier to get thru quickly, that way.

Now, the planned part of the segment had been done.  But, the mood felt incomplete at that point where the chorus had left off.  So, I winged it, extemporaneously improvising.

In comes the arpeggiated Hendrix chord.  Then the 4th, as first part of a plagal cadence (my ring fingernail of fretting hand rasping down, from octave on string 5).

Finally, ends upon root tone with E chord.  Now, this musical bit felt resolved and complete, to me.

As for, in general, how to improvise on guitar?  The best analogy I can think of is how one speaks.

You have in your mind, for example, to deliver a certain kind of message in a half minute.  You may repeat this same "speech" several times to several audiences.

Each time you may use slightly different amounts, and kinds, of words, say from 55 to 70 of them.  And perhaps they are adjusted in difficulty level from Reader's Digest fare to university grade, depending upon who is to hear you.

But, the same "song" is delivered every time.  This is, even though it is not a carbon copy of the previous.

One is not reciting the memorized, canned, Gettysburg Address, so to speak.  That is not the test for "perfection".  Rather, one is successful when having delivered all the essential elements of the message.

Just as one practices speaking, so one practices the musical instrument.  In neither example does the orator nor the musician, have to parade thru life reading from pre-printed script lifted from the paper page, every time communicative sound is attempted.

It's a continually developing skill.  Patience and perseverance are the watchwords.  Practice makes perfect.

And need I add one other essential element?  Motivation.  It's an important key to progress and success.  What one finds joy in doing never ceases to be a joy to do.

Now, what about "ear musicians"?  What about "illiterate" musicians, some virtuosos, who never go near the printed, musical page?

What about Chopin and Beethoven?  Did they memorize every note, as concert pianists seem to do?

These are questions for another day.

But, my take is that the more you know, the more it all overlaps.  There are no mutually exclusive kingdoms in music.  It all comes together.

AFTERTHOUGHT:
I can understand why so few, pro, recording artists explain what they're doing, didactically.

To make the recording you hear, it took me, literally, all of one minute.  First take is hereby delivered to you; turned out fine.

It was that easy.  And, final touches were even spontaneous, improvised in the moment.

On the other hand, explaining, step-by-step, what's going on, must've taken me all of the traditional, half-hour, music lesson.  Sheesh!

There's gotta be an easier way.

SOAPBOX:
By the way, this is a whole 'nother soapbox topic.  But, here let me insert an experiential observation about what's wrong with higher education today.

This sitting in lecture halls of 30 to 200 to 500 students and taking notes for an hour, is all wrong.  It's a bit akin to setting in front of a TV and absorbing Frank Zappa's proverbial "ooze" that tends to exude from there.  And, to what useful purpose?

An optimal education consists of small classrooms, with high faculty-to-student ratio.  But, that costs money, doesn't it?

Students should be encouraged to be active and creative.  Unfortunately, that is largely absent from higher education, especially in the lower-cost, public schools, where too much passivity is inculcated.

So, private schools tend to be better "educators" than public.  But even so, public comes off as a preferred alternative,...once we introduce a third possibility.

To-wit:  I shall concur in something I heard declared by Prez candidate, Bernie Sanders, lately.  "Look how much we spend on prisons in this country.  Shouldn't we divert some of these funds to spending it on higher education?  That way we could have more of our young people engaged as students, instead of incarcerated."

I don't know where he got the idea.  But, growing up, it's not the first time I've heard that trade-off comparison, made between prisons and universities.  None other than my pop, who practiced law for 40 years, divined the same insight.

That's when I first heard the concept, way back when.  Today, after all I've been through, I am surely confirmed in my belief that both men are correct.

I.     Prologue:
In these days of unprecedented, hotly contested, political polemics, here’s some tongue-in-cheek humor, to lighten the mood.

It’s new lyrics, I dreamed up, to a song most of my generation already has virtually ingrained into our DNA.

Just when you thought it couldn’t get any more surreal, here comes,...
“FOLKSY LADY”.

[Chorus]
You do my comptrolling
I won't do no gaydar patrolling, huh
You got to represent me, present me
Ooh, folksy lady ---      Folksy, folksy

[Verse 2]
Now, I see you, huh, raffling a bow tie
Oh, Folksy
Never a millionaire, common folk, like they and I
Folksy - ah mama listen now

Yeah,... I'm gonna elect you to the job
Women and elderly, no more they'll be robbed
And, healthy food from local farmers, yokel charmers.
Folksy lady.

V.     Epilogue:
Now, in all fairness to the real-life, subject personality concerned, should be made clear that “folksy” is a good thing, indeed.  Think Dolly Parton and Andy Griffith:  they are the epitome.  And also, not coincidentally, are universally loved.

As for being kidded (what’s coming off here), that implies being liked, i.e. likeable.  And this too, [is] very good.  One way to verify:  just ask any aspiring politician if it’s an useful character trait to own.

Music critic Thomas Ward points out "if one song could be said to encapsulate Hendrix’s entire oeuvre, 'Foxey Lady' is certainly closer than most."[2] The song opens with a fingered note "shaken in a wide exaggerated vibrato" so the adjacent strings are sounded.[3] After the amplifier is allowed to feed back, Hendrix slides down to the rhythm figure, which uses a dominant seventh sharp ninth chord, a jazz and rhythm and blues-style chord, often referred to as the "Hendrix chord".[4] According to biographer Keith Shadwick,

[Hendrix] casts the whole solo in the blues vernacular, using bent notes and glisses, or slides, between the notes primarily within the blues or pentatonic scales. To that he adds the new melodicism he had been hearing on recent British rock records.[5]

Prior to the recording, the group had not worked out an ending for the song and bassist Noel Redding claimed that using the last IV chord was his idea.[6] Hendrix biographer Harry Shapiro suggests that song's lyrics were inspired by Heather Taylor, who later married Roger Daltrey of the Who.[7] Hendrix later commented that he did not approach women in such a straightforward manner as the lyrics suggested.[6]e

VIII.     Footnote:  More of my music [appears] on YouTube.  Once there, search "Mark Drobnick". 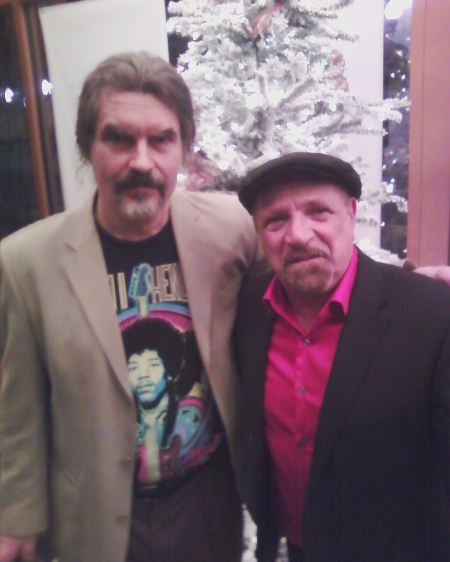