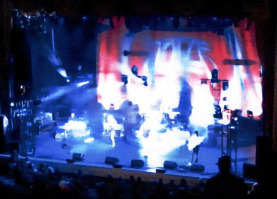 Or thanks to an additional nexus, “Stairway to Seven”, which regularly reminds us daily, via local, FM radio homage broadcasts, of Zep sonic archives.

Struck me as so pretty, in the moment it made me think:  “I should learn that and play it.”

Tokyo chap did most of the 2-minute song, then stopped at where 2nd guitar comes in.  Relatively easy for Pagey to do, multi-tracked in studio.

But live, you need a second guitarist (whom they had in the wings).  Instead, he and rest of band, instantly segued into,….

J.P. double’s solo.  “Black Mountain Side” on Danelectro 6-string, up ‘til when 2nd guitar (multi-track) enters, then into next song,…

Tokyo chap as Page stand-in, his musicianship, all you could ask for.  Most definitely up-to-snuff, as were they all.  Dressed in JBLZE T-shirt under sporty blazer jacket, in black/ white sneakers useful for guitar pedal manipulation, etc.  Rather curiously uncanny as to his demeanor and stage presence, in resembling his original predecessor (JP).

Did some Chuck Berry, jackknife, sideways gallivanting across stage.  Otherwise, his moves were strictly J.P.  With my “binocs” I could make out lots of detail, right down to the “D” on pickguard of his late-version, red metallic Danelectro.

You may already know, it’s an instrument that yields fantastic, unparalleled, “lo-fi” tones.  It’s showcased, for example, on Zep’s “In My Time of Dying”.

At the onset, I briefly wondered if this was Mr. Page himself!  That’s how good the tribute act performed.  Then next I thought:  is this Jimmy Page, Jr.?  When finally, upon the closest inspection, dawned on me:  this fellow’s Oriental?  Bulls-eye!

And, excellent re-creation.  All the right moves.  Possessed of spot-on attitude.  Solid “A” performance.

B.  Robin was the the most gracious at a meet-and-greet after the show.  It was organized by his personal asst., Mr. Laurie.  Some of the lyrics off of Robin's first couple albums at least, are decidedly heavy, as if the song's character is carrying the weight of the world on his shoulders.  And these were authored by RT.

But in person, Mr. Trower totally belies that mood.  Actually, he's upbeat, down-to-earth, warm, friendly, & considerate.  You couldn't ask for anything more.  Except a photo op?

C.  At that event, I was accompanied by my cousin, Johnny G.  Incidentally, his younger bro is an author.  Check out, "The Family Reunion" by Joseph Gerchar © 2021, on Amazon.com.  If you like James Bond and MacGyver, then you're gonna like Joe's adventure.

Joey, what an interesting cat!  In his spare time when not writing, he's busy maneuvering Florida's Everglades in whatever water craft available, as captain.  Knows his stuff.  Has a son, Jonathan, who's a Coast Guard and a wife, Roxanne, who's a gifted (pictorial) artist.

That is, provides essential, decibel dampening to prevent injury.

?   [Coitus interruptus] --- synonym/ euphemism   ? --- “What is and What should never Be”.  Pregnant pause before ensuing guitar chord answer & response, stereo panned, at outro, when gong is crashed.

In one of J.B.’s several “interlocutory” monologues, he spoke of feeling, “a kick to the balls.”  What he meant was the generation gap:  he to his dad; now more lately, dad’s grandson (his own son), with him.  Specifically, as to musical taste.

Back in the day, Bonzo could not seem to impress Jason with his repertoire.  Jason was enamored by punkers and the likes of Sting.  Now lately, déjà vu, Jason encounters likewise with his own son.  Whatever kids are listening to today, it’s a different menu than our generation.  “Talkin’ ‘bout my generation,” --- The Who.  “The song remains the same!”

The two seated adjacently, front row center.  Were those really them?  Crowd dispersed too quickly afterward, for me to verify.

Excellent Robt. Plant stand-in, same commanding voice.  I didn’t see him tickle the reeds of any harmonica, but he did shoulder a Martin acoustic for a couple of songs, rhythm-chording away.

Didn’t J. Page have a similar-looking bloke during his “The Firm” sojourn, as part of that band?  I recall, as having been their drummer.

These days, a Korean-made/ Calif.-set up, product.  (So.) Korea churns out high-quality axes, their workmanship, excellent.

B.  Continues in the parade of USA’s overseas subsidiaries over the years.  From Japan to Korea to Indonesia to China (Taiwan figures in somewhere too, e.g. as to electronics).

And since I’ve ventured into a NAFTA neighbor, let’s complete the short list.  If you’re shopping native Mexican, then you’ve simply got to try out guitars (plus related folk & traditional instruments) from this locale:  Paracho.  Again, quality stock and workmanship abound, obtainable at wallet/ purse-friendly prices.

Re:  Gibson (sister co., Epiphone, also of great merit; it’s no slouch either).  But, like the human counterpart, speaking anthropomorphically, not exactly of primogeniture entitlement.  (Ubiquitous pro’s cart about Gibson guitars on stage.  Maybe endorsement money helps to explain why.)

Or how about Paul’s acoustic Texan?; featured on “Yesterday”.

Why am I talking about these brands, Gibson, et al?  Answer:  because these precisely are what Led Zep & progeny utilize, to generate the mellifluous and oft-times tumultuous, both diminuendo and earthquake tones, we crave and enjoy.

B.  Martin – rich, balanced.  Any note, from anywhere on fretboard, sounds out resonating, as clearly pronounced as any other.  There are no “dead spots”.

A rosewood sound box, is my favorite (projects more bass).

Mahogany too, is a frequently-encountered standard.  Sounds of more even and level equalization.  Can even be of exotic pedigree, as in African-derived.

C.  Lately, of up and coming popularity, is mahogany’s similarly sounding relative, sapele.

Thus, out of mutual consideration and esteem for both them and me, I opted to comport myself as more withdrawn.  Heck, don’t want these chaps “sick again”.

And as to me, I was spending substantial time around an animated, then soon to be 102-year-old, as primary caregiver.  Avoid this grave menace, whenever possible.  No queremos cucar al diablo (translation:  we don’t want to provoke the devil).

(Footnote type info:  how did I approach & manage the treacherous dynamic?  A:  Bought my ticket the day before, soliciting seat next to empties.

(Now then, in life, practically most stuff, you formulate backup plans B, C, etc.  Just in case.

(Of course it's a given, that box office wants to sell all it can.  So, hypothetically, I could have arrived at curtain time to find myself sandwiched between the likes of Typhoids Mary & Marvin!  What to do?

(Size it up, and go with your gut.  I've got more med background than the average person.  Helps to make me feel confident in myself on matters medical.  If it looked too risky, I would have bolted.  Ate my ticket.

(Even more complex is if I'm around an asymptomatic carrier.  You never know.  In that event, maybe I would have remained but with fingers crossed.  It's a fine line between intrepid and reckless.

(Iatrogenic and nosocomial, you know these concepts?  I have only good to say about the med profession in my ample experience, but what those terms imply is that one comes out more sick than when they entered Dr. office, hospital, etc.

(How?  Insufficient precautions and quarantine so that victim catches new bug right there in that sanctuary of ostensibly, therapeutic, curative treatment.

(Pero, siempre estamos en la lucha.  ­¿Cómo más va a ser?  Gotta hang in there and be in the struggle every day.  That's a good life, the best way.

(Act smartly, but by all means, act.  Make your contribution to a better world in your own way.)

Turns out, given local law & ordinance in force at that moment, the band were the only persons of the entire 2,400 seat house, devoid of face masks.

No problem, as there on stage, set apart from the rest of us, they were placed well beyond the recommended, 6-foot social distancing, which Dr. Fauci and countless other public health and private M.D.’s have urged since Corona lockdown’s implementation.

Since anyone can get that info off of the world-wide-web, in one form or another.  Most times you can hear what a device sounds like on YouTube.

That’s all you need.  Audition it.  Let your ears be your guide.  Believe in yourself.  Your selection will be best.

I am not a collector.  That does not interest me at all.  My mindset has always been, go strictly for whatever gets the job done.

My two principal instruments are piano and guitar (and related).  Just like women with their shoes, I must admit I’m a bit like that about guitars.

But each is different in some important way!  As objectively as I’m able to make that assessment, I think I’m being objective and not self-delusional.

These days, I regard electronic pianos as the cat’s meow.  You never have to tune them.

How nice is that!  Instead of every season with a mechanical, or for the classical performing pro’s, done prior to every concert, you’re good to go instantly, whenever; as long as that internal mother board lasts.

Schecter is of note.  High quality.

26.  And the Variax is a wonder.  This last is like what electronic pianos do with their multiple voicings of grand piano, strings, harpsichord, etc.

The Variax gives you a dozen alternate tunings plus a panoply of stringed-instruments, all in one guitar!  Baritone, banjo, resonator, a host of vintage guitars both acoustic & electric.  Wow!

Now, as applies to Zep, relevance?  Fact is, aside from Joni Mitchell, I don't know any musician(s) who create(s) so many alternately tuned songs, as do they.

I know why Joni writes that way.  And am always interested to learn other musicians' thinking on why they similarly so elect.  (Gotta study Keith Richards a bit more, his "open G" essays.)

Generally, the attraction is that alternate tunings afford one passport into "another country" of new chord shapes.  Chord voicings and intervals impossible to reach with your fretting fingers on standard tuning, oft-times become a breeze, super easy, once we modify away from EADGBe.

Our rapid fix to re-produce their music:  the Variax!  (Right tool for the right job.)

Simply rotate a dial and you're already there, in the correct tuning.  No need to waste time re-tensioning string(s) and tweaking truss rod curvature.  "Instant Karma"!

That is, 7 of 17 or 41% of the concert nite's menu, consisted of original songs in non-standard tuning.  Constitutes approaching nearly half of their output for the evening.

As I say, it's a distinguishing & impressive characteristic of this group:  their frequent reliance upon alternate tuning.

Over the Hills & Far Away

What is and what should never be

Your Time is Gonna Come

When the Levee Breaks

The Song Remains the Same