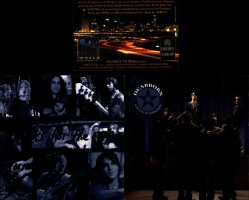 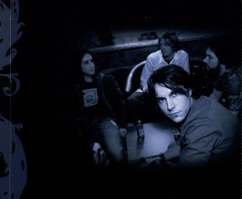 “Gordon Lightfoot; every time I hear a song of his, it’s like I wish it would last forever.” --- Bob Dylan

Gordon Lightfoot, supported by the “road warriors,” prematurely ended his campaign Sunday night at the Riverside, Milwaukee.  A bit the worse for wear and tear, you’ve got to admire this trouper for delivering a solid two hours of performance, some 25 songs, in spite of infirmity which had stricken him, nine days before.  While average John or Jane Doe might tend to phone in sick to work because of a virus or hangover, here was Gordon, soulful and moving as ever, though somewhat constrained, as he sallied forth to engage us, scarcely encumbered by the effects of a minor stroke.

So, his voice was not as capacitated as usual.  Still the range was there, for the less demanding repertoire he selected to interpret.  “Daylight Katy” was steered clear of, despite some cajoling from the audience, since its harmony (and range) would be too challenging, Gordon responded.  The melodies he did sing, always were on point, even though the various lyrics, truncated at times, did not quite attain continuous, enunciated elocution, as we are accustomed to from his studio output.

Prior to the quintet taking the stage, a survey of the equipment set up, revealed Roland and Fender amps, Gibson and Gretsch guitars, foot pedals, keyboards, drums, and, oh yes, a model, nautical freighter, complete with mid-section deck of cargo hatches, through which could be loaded (scale size) iron ore.

Okay, so we were going to get to hear “Wreck of the Edmund Fitzgerald” tonight.  Such was to be expected.  After all, it references the Great Lakes, Wisconsin, and as Gordon later instructed, the craft had been built here, in Milwaukee!  The prop was a foam replica created by artist, “Jeff Cowell.”

Parenthetically, the fate of the “Fitz” compounds some irony as part of its tragedy.  This was to have been the captain’s very last voyage before retirement, after a safe record and career of some 35 years.  A pilot more experienced and seasoned, would have been difficult to come upon, anywhere.

The coast guard’s official inquest speculates two possible causes.  As Gordon sings, “a main hatchway caved in,” the tormenting elements saturating the hold’s contents, to the point where the ship lost buoyancy.  Alternatively, it is possible that the craft, during its voyage, scraped too violently upon a shoal some seven fathoms shallow, while it braved the storm across a particular stretch of Lake Superior, thereby perforating the hull’s underbelly, causing a breach for water to enter.

Ultimately, robotic tech has been able to photograph all of the wreck’s exposed aspects, at its resting place under 500 feet of water.  But as a substantial portion of the craft lays embedded in sand and mud, there’s not sufficient access for complete, comprehensive inspection.  That on-deck hatchways are now unsealed, proves inconclusive.  The differential between atmospheric pressure and 16 times that amount from the environment where it sets, could have caused implosion at access points, after the craft was already under.

Gordon began the concert with 12-string acoustic, then alternated to 6-string, recurrently back and forth, throughout the evening.  To match his vocal register, he likes them “capo-ed” at the third fret.  Lead guitarist, Terry Clements, matched him on pitch, but, for the second half of the program was seen to be at a whole tone higher than Gordon!

I asked my guitar teacher at the time, Mike P., about this.  He said, no biggie.  It’s common enough, and there’s nothing extraordinary about that technical practice.

By the way, check out Mr. Mike’s, “How to Play the Ukulele” lessons.  By Michael Poupko, new since Nov. 2021, they are available in multiple formats, via,

Ukulele?  Where’s one, well-known place to hear it?  Immediately comes to mind, Paul McCartney’s “Ram On”.

The band dressed casually, polo shirts and jeans, as average men, two appearing a bit panzón, and two balding.  (By the way, these “average” men played, quite excellently.)

Then there was Gordon, somewhat reminiscent of actor Errol Flynn in appearance, always he looked gaunt and tidy, face expressive.  Crowd pleaser that he is, underwent a costume change at intermission.  Gordon started the show in long-sleeved, maroon shirt, brown vest, black pants and shoes.  Finished with black & silver Hawaiian shirt, black pants plus white shoes.

There was a light show of autumnal leaves and colors as backdrop.  Being the first week of Fall, this added a nice, atmospheric, fitting touch.

Nearly half the songs were oldies from the 70’s.  This coincided with the audience’s demographics, whose members filled the theatre to 90% capacity.  The event had been transferred from the originally planned Pabst, once its space of 1,300 had been sold out.  Riverside seats 2,000.

Gordon explained that his first hit single happened once he switched record labels, to Reprise.  Hence came, “If You Could Read My Mind.”  Until then, he had made five albums with United Artists (coincidentally, Don McLean’s distributor around that time).

Mr. Lightfoot conjures up suspended and seventh chords, which are a major element in his “sound”.  There, the secret’s out; that’s why he sounds that way!  By my count, roughly 70% of the evening’s repertoire invoked these intervals.

The tales he weaves are romantic, Arcadian, mystical, and adventurous, even naturalistic, according to the dictates of the situation.  Add to that his voice, masculine, projected from deep within, resonating, and virile.  Thus is constituted the corpus of his music.

The chords are never quite resolved, the characteristic ambiance, on “Carefree Highway,”  “14 Karat Gold,” and, newer material, too.  The suspended chord, for example, like you hear in the piano intro to Billy Joel’s “She’s Always a Woman,” is employed by Gordon with an approach all his own.  Joel utilizes the second inversion of a pure major triad, ascends to its suspended 4th, then back, finally down to its 2nd.

Simon & Gar(funkel)’s “The Dangling Conversation,” does exactly that, dangle, because, the anticipated resolution goes unresolved, creeping up from a pure triad’s structural 5th, next to a 6th, then finally to Gordon’s 7th.  It ends upon the same interval Lightfoot is accustomed to making a mainstay of, during the preponderance of his concert fare.

That’s like how George Harrison sings, “Mingles in your fingertips…(wary) of thoughts that linger…wanders aimlessly,” in Beware of Darkness.  The song’s attitude begins and ends with G7 and Dsus(pended)2, combined with their reappearance several times throughout.  The effect produced is akin:  dependable, manageable and navigable, in a sense, like a patent medicine, results predictable.  The mood hangs in the air, persisting and perceptible, waiting for another song that may carry it elsewhere.

A Gordon’s case-in-point is “Beautiful,” where you can experience this craftsman build upon the archetype, but according to his own inimitable style and specs.  He taps into the universal language, and then expresses it in his own dialect, speaking to us very directly and clearly.  “’Cause we been friends through (Dm(inor)7) rain or shine, for such a long, long (Amaj7) time (Fmaj7).”  “That’s (Esus) telling you, I’m telling you, that you’re (Amaj7) beautiful.”  www.lightfoot.ca/beautifu.htm  Lightfoot’s voicing, layered upon this harmonic bass foundation, sends the song soaring.

In a parallel fashion to how programmatic music evokes a story, the tonal combinations of Gordon’s, succeed in tugging at one’s emotions.  Abounding sonic colorings dangle, replete with unrequited yearning.  The tones and lyrics work, synergistically, so that they manifest themselves multiplied.

For the sake of (less partial) completeness, Gordon’s definitive, quintessential songs, carrying his own distinctive stamp, his “sound,” would have to include:  In My Fashion, Rainy Day People, Waiting For You, Sundown, Canadian Railroad Trilogy (“navvies,” “muskeg” jargon), and Triangle (surprising what he attributed its inspiration to, regardless, it’s on a par with his best).

More on the list would be:  Heaven Help The Devil, Hangdog Hotel Room (Kristofferson influence), All The Lovely Ladies, If You Could Read My Mind, Baby Step Back, Blackberry Wine, Early Morning Rain, She’s Not The Same, Sit Down Young Stranger, Approaching Lavender, Sea of Tranquility (pastoral setting), Pony Man, Thank You For The Promises, Shadows, and Your Love’s Return (Song for Stephen Foster).

It all comes down to a matter of what he’s saying and/or how he says it.  No one else matches him.

Gordon paternalistically introduced “The Watchman’s Gone,” one of the evening’s numbers, by declaring, “Here’s one from the Sundown album that I really love.”  In a similar vein, Bob Dylan came to mind, who has said:  “each song I write is like one of my children.”

“Edmund Fitzgerald” indubitably, most appropriately and perfectly, is Mr. Lightfoot’s.  Its theme has the Great Lakes as backdrop, the North Country its milieu, the nautical its trajectory.  Gordon hails from Ontario, Canada, nestled atop all this geography.

In All I’m After, what beautiful four-part harmony is the climax!  “I think I got it made,” leaps out of the speakers to surround, embrace, and infiltrate the listener.  One can vividly picture in the mind’s eye, VU needles jumping off their scales, reacting to the dynamics, as the studio’s recording engineer scrambles to keep the peaks from topping out, into over saturation.  They are voice-over harmonies so rich, textured, and palpable, that they acquire the corporealness and duration of four dimensions!

There are Gordon’s sensational, lyrical hooks:  (Sundown) “I can see her lying back in her satin dress in a room where you do what you don’t confess;” (Triangle) “All sweepers and cleaners with no misdemeanors;” (All I’m After) “Is to be the flame in your tattoo.”

(Thank You For The Promises) “they may not pay the rent, you never can be sure when promises get bent;”  (If You Could Read My Mind) “I don’t know where we went wrong, but the feeling’s gone and I just can’t get it back.”

(Baby Step Back) “I don’t write no bad checks, I have no wish to repent;” and (“Fitz”) “The church bell chimed ‘til it rang 29 times, for each man on the Edmund Fitzgerald.”

When Gordon recited the narrative, insert verse of “In My Fashion,” about the slide rule, I thought, in these days of the P.C. and electronic calculator, how many even know what he’s referring to?  True, it’s not as antiquated as the abacus.  Incidentally, it is the reason 5’s can be rounded to the nearest even number (rather than always, up), namely, to facilitate its use, since many of the scale intervals are calibrated in fifths, not tenths.

Obsolescence --- nay, nostalgia, --- rears its head again with “Old Dan’s Records.”  Sure, many of us have them, records, vinyl discs to be played with stylus and turntable.  But, they have since become supplanted by cassettes, compact discs, MP3’s and the iPod.  Reassuringly, and not only for those who do not have access to a time capsule, the contents’ perception is the same, only it is their format that has evolved.

Marshall McLuhan pronounced:  “The medium is the message.”  But, here appears to be an exception.

And I am comforted in being able to feel, that it is so.